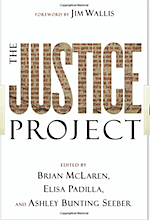 The Justice Project is the latest book in the Emergent line from Baker Books. I think it’s important that a movement often accused of some sort of absolute moral relativism has come out with a book about justice. It’s also important that many of the voices in the book are not well known and many translated from Spanish. The book has a lot going for it.

Brian Mclaren starts out the book with an important caveat about the difficulty of defining justice. This notoriously difficult concept has troubled humanity at least since Socrates came up empty searching for a good definition. All Socrates found was a lot of people who thought they knew what justice was, but didn’t. They claimed knowledge that they didn’t have. It seems we haven’t come so far after all.

My favorite chapter, of course, was “Just Countryside: How Can Justice ‘From the Roots Up’ Affect Life in Rural Areas?” by Sarah Ferry. While many of the other chapters touched on problems with climate change, environmental degradation and the need for creation care, this chapter got closest to answering the question why. Taking care of our planet doesn’t make much sense unless we understand why. Unfortunately I think a lot of people that see the need to take care of the planet believe that others will intuitively understand why this is important if they can show them the devastation. Again unfortunately, I don’t think that this is often the case. We are so far detached in our understanding of ourselves as creatures subject to the limitations and laws of nature that it is difficult for many to make the connection between the planet and themselves.

The biggest downside I see is that the scope is just too big. Most of the chapters are only 5-7 pages. Each chapter has an important element to add to the concept of justice in the Christian tradition, but just about the time you start getting into that particular issue the chapter is over. Most of the book, therefore, only remains at the very surface of justice, never dwelling long enough on any one element to go deeper. One might argue that this is an introduction to the project of justice in the world. Introductions are necessary, I suppose. It just feels like too much of the conversation about justice never moves beyond the surface. That is why I still hear Christian musicians encouraging people at their shows to sponsor a child with a certain organization that will remain unnamed. This book points us beyond the surface, but it never quite goes there. Each chapter and topic deserves an entire book to explore the implications.

While perhaps the title is a little hyperbolic, this is a needed book with many new voices.

0 comments on “The Justice Project”