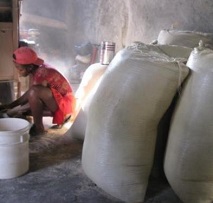 “Instead of foreigners sending us food, they should give us the chance to do our own agriculture so it can survive.” So said Rony Charles, a rice grower and member of the Agricultural Producer Cooperative of Verrettes, in Haiti.Giving domestic agriculture the chance to survive would address four critical needs:

1. Creating employment for the majority, estimated at 60% to 80% of the population;[1]
2. Allowing rural people to stay on their land. This is both their right as well as a way to keep Port-au-Prince from becoming even more perilously overcrowded;Addressing an ongoing food crisis. Today, even with imports, more than 2.4 million people out of a population of 9 million are estimated to be food-insecure.
3. Acute malnutrition among children under the age 5 is 9%, and chronic under-nutrition for that age group is 24%.[2] Peasant groups are convinced that, with the necessary investment, Haiti could  produce at least 80% of its food consumption needs; and
4. Promoting a post-earthquake redevelopment plan that serves the needs of the majority, unlike the one currently promoted by the U.S. and U.N. which is based on the growth of sweatshops. See “Poverty-Wage Assembly Plants as Development Strategy in Haiti”.