Peter Barnes book Capitalism 3.0 (which is available as a free PDF under a Creative Commons License at onthecommons.org) is a thought provoking and interesting read about the future of capitalism and the future of our world. Barnes vision both of what went wrong in the past and for how to create a more sustainable future within a capitalist structure are compelling. That’s coming from someone who tends to be pretty skeptical of capitalism’s potential to sustain us in the long term. The main idea of Capitalism 3.0 is that we have left the commons out of our economic equation and therefore need to create a commons sector to balance out the private sector that dominates our current model. Capitalism needs an upgrade.

One of the main points Barnes hits again and again is that private corporations are already using the commons for their own profit. The commons includes nature, community and culture. Nature is the example everyone thinks of when they hear “tragedy of the commons”, but streets, playgrounds, libraries, museums, laws and other shared gifts make up our communities. There are also cultural commons. One example of corporate abuse of cultural commons is all the stories in the public domain that Disney has turned into movies and profited from (Aladdin, Atlantis, Beauty and the Beast, Cinderella to name a few) without adding anything back to the public domain. So, the commons is generally unaccounted for in our economics (except in the case of a few trusts and permanent funds which is, in large part, Barnes’ solution to the problem). 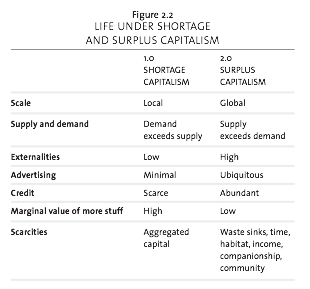 I found Barnes’ history of the evolution of capitalism very helpful in thinking about how we might move forward within the current system (see chart on the right).

Demand, in other words, exceeded supply, and we lived in what might be called shortage capitalism. We could also call it Capitalism 1.0. After the change, we shifted into surplus capitalism, or what I call Capitalism 2.0. In this version, there’s no limit to what corporations can produce; their problem is finding buyers. A sizeable chunk of GDP is spent to make people want this unneeded output. (23)

Almost all of the property rights under capitalism so far have been allocated to individuals and corporations. Federal management of forests and other natural resources has fallen heavily on the side of permitting corporations to extract resources for private gain without giving back or caring for the commons. There are some examples of trusts that function in the long-term interest of future generations on the state level. At the heart of this shift is another way of thinking about ownership, property and rights. Barnes’ description of trusteeship sounds a lot like the first chapters of Genesis.

First, ownership isn’t the same thing as trusteeship. Owners of property—even government owners—have wide latitude to do whatever they want with it; a trustee does not. Trustees are bound by the terms of their trust and by centuries-old principles of trusteeship, foremost among which is “undivided loyalty” to beneficiaries. (45)

Beneficiaries include future generations, which don’t factor in to our current economic system. Beneficiaries should also include non-human animals and ecosystems in terms of the natural commons. We all claim to value community, nature and culture. So, why haven’t we included the commons in the economic equation?

Capitalism and community aren’t natural allies. Capitalism’s emphasis on individual acquisition and consumption is usually antithetical to the needs of community. Where capitalism is about the pursuit of self-interest, community is about connecting to—and at times assisting—others. It’s driven not by monetary gain but by caring, giving, and sharing…It’s rarely imagined that community can be built into our economic operating system. In this chapter I show how it can be—if our operating system includes a healthy commons sector. (101)

I’m working on a post about Stephen Jay Gould’s book Ever Since Darwin. Even when he wrote that book in the 1970s it was becoming clear that competition was only part of the Darwinian equation describing the adaptation of species to their environment. We have selected only (or at least primarily) the mutations related to competition as we have developed our capitalist system. Without further adaptation this system will cause its own extinction and possibly our own. Barnes illuminates the possibility of including the altruistic aspects of our human nature through trusts, permanent funds and rights delegated to a commons sector.

As a final note, I was very struck by the idea and possibilities of “predistribution of property”.

In my mind this changes the whole conversation about a more equitable distribution of resources. It frames the question of inequality of wealth in terms of property rights. It also transforms the concept of property rights into the right to property which is what we find in the Jubilary laws of Leviticus 25 and Deuteronomy 15. The obvious question is what the mechanism would be for creating such a predistribution.

The answer lies in the commons—wealth that already belongs to everyone. By propertizing (without privatizing) some of that wealth, we can make everyone a property owner. (105)

Barnes goes through a lot of detail about how all of this would work including specific trusts and permanent funds at local, state and federal levels, how they might function and what they would manage. I would encourage my economically-minded friends to read more of the detail and give me some feedback. As I said before, even though I tend to be doom and gloom about capitalism’s track record and future possibilities, I don’t have much negative to say about Barnes’ upgrade. It answers many of my questions and the historic problems of the capitalist experiment. The main question seems to be whether or not the current system has the capacity to make these kinds of changes. Barnes is hopeful, but cautions that the window for action in implementing these rights is narrow. I remain skeptical, but Barnes challenged me to envision possibilities I hadn’t imagined and that’s always a good thing.

0 comments on “Does Capitalism Need an Upgrade?”