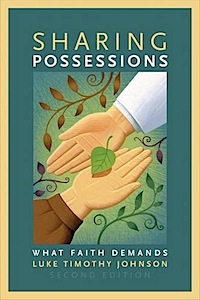 I was excited to read Sharing Possessions for two reasons 1) previous conversations about our relationship to property and possessions in the Bible and 2) practical help with how to live this out in community. While this was interesting book for the first reason, it was not very helpful with the second. That’s not a fault of the book. It just was not the author’s purpose.

Luke Timothy Johnson has been a favorite scholar of mine since I used his article, “The Use of Leviticus 19 in the Letter of James”, for a paper in seminary. I’ve since heard an interview and now read one of his books. I respect his work a lot. Even though this book was not what I expected or hoped, it was a solid piece of scholarship and very helpful in thinking through our relationship to possessions as people of faith.

Johnson starts off considering the philosophical idea of “owning”, “having”, or “possessing”. He points out the ambiguous nature of our language in describing our own selves and our bodies. We say that this is “my” body or that I “have” a hand. What is the nature of our identity as it relates to our bodies. Are we something besides our bodies that simply possesses our physical self? Or can we say in some sense that we are our bodies? Or is it some combination of the two, some third option?

At first I was put off by this starting point. But if it is this difficult to understand the relationship between body, mind and identity, then how much harder must it be when material possessions enter the picture. Johnson rightly reminds us that we do well to understand our own identity and relationship to our own physical existence before attempting to unpack how that self relates to the world of material possessions. I think Johnson’s definition of possession or ownership is a good one. “Generally, I can safely claim to own something when I can effectively assert my power over it.” (2) I think the inclusion of the power dynamic in ownership is important.

If the more I have the more I am (the stance of idolatry), then my worth is measured by what I possess. But in a world of limited resources, I can have (and therefore be) more, only when you have less… there is really no way for me to measure my existence except by comparison with the achievement of others… To lose one of my possessions is to lose part of my self. Allowing others to share freely in what is mine means that I have no way of distinguishing myself from them; I lose my identity. (85)

The idea that wrong relationship to our possessions is idolatry is a powerful and important one. It is also important to recognize that our relationship to possessions is directly related to other human beings. I remain unconvinced that it is possible to continue increasing the wealth of individuals indefinitely without adversely affecting others. The belief that we are somehow separate and disconnected from our brothers and sisters next door and around the globe only leads us to idolatry, which leads us to Johnson’s next point.

In the preaching of the prophets, therefore, as in the laws of the Pentateuch, we see that the human use of possessions directly symbolizes and makes real the fundamental human response to God, and it does this precisely in the way possessions are taken from or given to other human beings. We respond to our neighbor as we respond to God. How we use possessions reveals both.” (97)

The tradition of which we are a part, and which we affirm, recognizes that as bodily creatures human beings inevitably must “have” as well as “be”… Human “owning” is not itself a result of sin but the consequence of being a body. Humans, therefore, cannot become completely “dispossessed” without losing their identity. (114)

In “1 Cor. 7:30-31 Paul says that one of the consequences of living in a period of eschatological tension is that ‘those who buy [should act] as though they had no goods, and those who deal with the world as though they had no dealings with it. For the form of this world is passing away’… Paul does not encourage his churches to withdraw from society and form closed, intentional communities. The Christian church is not an alternative social structure, but a way of living in freedom within the world. (110)

If Paul does not encourage “closed intentional communities”, I wonder if he does encourage open intentional communities. The problem seems to be with the terms “withdraw” and “closed”, not intentional. There are intentional Christian communities (of which I am a part of one) that do not intend to be closed or withdrawn from society. I think Johnson unfortunately (and perhaps unintentionally) lumps together all attempts to live out the Gospel in communities that include some practice of sharing possessions in common as misguided and even naive. While the warning that Scripture does not give clear guidelines for how we should relate to property is important, it could lead us to believe that it does not matter how we relate to the things we own which Johnson clearly argues against. According to Johnson’s own words quoted above, the way we relate to possessions is of utmost importance lest we fall into idolatry.

Again, in what is a pretty concise summation of the findings of Johnson’s investigation into what Scripture says about possessions, he says this,

The Scriptures do not present for our consideration or implementation any grand scheme for the proper disposition of possessions. There is no Christian economic structure to be found in the Bible, any more than there is a Christian political structure or educational system. The Bible does not tell us how to organize our lives together, and still less which things we should call private and which public. Nor does it propose a clear program of social change. It does not even present one way of sharing possessions as uniquely appropriate. (115)

I agree with the sentiment that there is no simple fix for us in the Bible, no system or set of rules or guidelines that will once and for all answer the questions we’re asking. However, I think the Scripture speaks a little more strongly concerning our relationship to possessions than Johnson’s conclusion would suggest (and as before he himself points out in his survey of the Bible). While keeping the caution against looking for a system or quick fix in mind, I think it would be helpful to put down some anchors on this issue and make some claims about principles for living in community and relating to possessions and wealth. We need good theology, but we also need practical advice on how to live. Since Scripture is silent on exactly how to live this out, it seems appropriate to listen to the wisdom of people throughout Christian history, but in particular more recent communities, that have tried to live out another way of relating to possessions and wealth in the midst of the world.