In a comment on a recent post my good friend Justin posed the question, “Does God allow population growth?” when he said, “if God allows population to progress further and put strain on the earth then I have faith in His purposes.” The perpetual problem of humanity’s freedom to choose and God’s ultimate sovereignty is one that has troubled me (not to mention humanity) for a while now. This problem among Christians tends to devolve into two camps (very generally) those who insist on protecting the sovereignty of God and those who insist on protecting the freedom of human beings (again generallythese are Calvinists and Arminians). 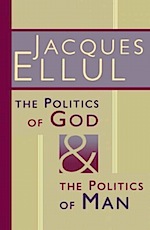 I tend to shy away from these arguments and shelve my own opinion since I don’t have a strong one and usually find the question kind of boring. This is probably because I find the argument dualistic and therefore missing the point. It also seems very loosely tied to the theme of this blog and overly theological and possibly esoteric. But with a title like, The Politics of God and the Politics of Man, there’s bound to be a connection. Jacques Ellul carves out an interesting third way between these two options that intrigues me. Ellul analyzes several stories from 2 Kings as a way of addressing how the will of God is worked out in the midst of free human beings.

Thus in this vision of God’s action there can be no question at all of cutting down God’s sovereignty over history and events, but rather of showing that this sovereignty is multiple, supple, and living, not mechanistic or metaphysical. God has condemned Ahab. God has chosen Jehu as king. But God leaves it to man to find ways and means. He leaves it to man to determine his acts himself in so far as he is responsible. God opens a door as it were, and the passion of man is unleashed. (102)

In the stories the prophet does not act; he only speaks. This is how Ellul reconciles God using Assyria, or Cyrus of Persia, as his instrument of judgment on Israel and at the same time condemning them for doing what is, in effect, God’s will. God passes judgment on Israel and the door is opened for Assyria or Cyrus or Nebuchadnezzar to act. The means with which they judge Israel or interpret the word of the Prophet is not necessarily God’s will, only the truth spoken by the Prophet. In this way humans are always responsible for their own actions. God’s truth is proclaimed and God’s will accomplished through the imperfect means of free human beings.

Like Abraham, one may say, Jehu is set outside the morality which God established. But Jehu is not Abraham. In fact Jehu is a man who, faithful to God and knowing his will, comandeers this will and makes it his own. He identifies his own cause with God’s design. He thus sets out to shape history in the name of God but also in the place of God. (112)

As a reminder, Jehu is the king who killed a ridiculous amount of people in an attempt to cleanse Israel of idolaters. He tricked all the Baal worshippers into congregating in one place, claiming he would be more of an idolater than his predecessor (prophetic words), and then ordered his men to kill all of them. The words of Elisha were fulfilled by Jehu, but God did not provide the means. Jehu did. This is where Ellul clearly begins to demarcate the territory of God’s politics from the territory of human politics. Confusing the two has been the source of much trouble in the history of the church and the world.

The tricky part is that we hear an authentic word of God. We do catch glimpses of God’s truth, but like Jehu we grasp for it. We want to own it. We want to possess it. While we think we grasp God’s will, we set out to shape the world in the image of what we have discovered only, in the end, to find that we have tried to shape the world in our own image.

The sin of Jeroboam was precisely that he made theological and religious decisions regarding the true God for political reasons, thus subordinating the spiritual life of the people to political necessity… What we have here, then, is not an idolatrous state, but a political power which creates a state religion or which uses the truth of God, the revelation of God, and the work of God for political ends. It subordinates the will of God, not to its own will, but to the greater good of the nation or the state. It integrates God’s work into the imperative of a realistic policy. (125)

The sin of Jeroboam is referred to over and over again as a sin to which the kings of Israel continually succumbed. Ellul spends more time explaining the sin of Jeroboam than I can here. Suffice it to say that although Jeroboam and Jehu are very different figures, they both commit essentially the blunder. They confuse their own political means and ends for God’s. Jehu and Jeroboam both intended to help God’s people and strengthen the worship of the true God, but they thought that their own political means could accomplish this. In the end this leads them to see their own actions as ultimately God’s will. This sort of idolatry is subtle which makes it all the more insidious.

We have simply to be, and we can only be a question put within the world and to the world, a question invincibly confronting it. This is our efficacy. It is the efficacy of the question, a question which society and sociological movements cannot assimilate… It is not at the level of works and their results that this efficacy may be seen; it is at the level of inassimilability. Whenever the church thinks it has succeeded and become great, it is to that degree unfaithful… Our only guarantee of efficacy is the achievement of nonconformity.” (141)

Here Ellul questions our effectiveness and our insistence on this as the measure of the church’s success. Ellul’s third way between the sovereignty of God and the freedom of human beings undermines all of our human projects for building the kingdom. Even the ones that sound right and true. Whether it’s purity of doctrine or faith or the achievement of peace and social justice, in the end we have heard a word from God and then in turn crafted a vision of the world in our own image. How difficult it is to be led by the Spirit!

In our human endeavors to embody and live out the kingdom of God whether it’s through justice, peace, sustainable agriculture or contemplation, we tend towards extremes of thinking it all depends on us or there’s nothing we can do. The truth that Ellul illuminates liberates us to speak the prophetic word without needing to guide the process, to embody the reality of the kingdom the best we can in our sphere and trust that we are not alone.

In spite of all that can be said, in spite of every secular argument to justify money and the state and science and technology, to show that we are right to use these things, it is quite unbiblical to appeal to these agents of political power. (147)

Now, I might be only including this because of its connection to conversations here about the role of property in the Bible. I do think that it reveals something about the argument Ellul is making. It reveals something about our own trust in these things. These things cannot and should not be justified by Scripture. God weeps when Israel rejects the judges for a king. The relationship with money and possessions described in Scripture is uneasy at best. Science and technology are in some ways simply extensions of money, possessions and the state, but more in that when we talk about the book Sharing Possessions.

[The Church] has never to say to the state: This must be done. It has rather to tell it on God’s behalf what will in effect be done, what the state on its own initiative will undoubtedly be led to do. (85)

This recalls Martin Luther King Jr.’s famous statement that the church is the “conscience of the state.” How often are we telling the state what to do? How often are we trying to coerce the state (or others) to do what we think is God’s will? Ellul and King both reveal that our job is actually to reveal the truth about what the state really is. This is the prophetic word that is spoken. It does not predict the future. Instead, it only reveals the truth of the nature of the kingdoms of this world. It says, “This is how Empires behave. This is their nature and you are no different.”

If you’ve made it this far you might be wondering how this ties back into the question about whether or not population growth is God’s will. The problem with the dualistic answers to this problem is that we’re left with either fatalism or an uninvolved God. So, to say that population growth is God’s will simply because it has or is happening denies any real relationship between God and ourselves. It also does exactly what Ellul describes as the sin of Jeroboam by confusing our own desires and actions for the will of God.

On the other hand, we could be left only with the freedom of individuals to make their own decisions and be responsible for them. I have good friends who are satisfied with this. Perhaps they find hope in the community of humans and hope that this will be enough to guide us into a better future. I believe that the prophetic word of Elisha and some today speaks a truth into our world today tat the world could not see without it. The word of God is a word of hope and a vision of a future beyond what it reveals of this world to a deeper reality, a greater possibility.