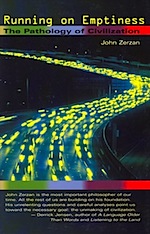 I hinted recently that I’ve been immersed in a book by anarcho-primitivist philosopher John Zerzan. After reading Ishmael, The Story of B and My Ishmael, I wanted to explore these primtivist ideas further. A frequent criticism of the primitivist, anti-civilization critique is that it holds no vision for the future. It’s overly nostalgic and romantic about the life of hunter-gatherers as one of ease, peace and harmony. So, I picked up Zerzan’s Running on Emptiness, a collection of essays from over the years covering everything from philosophical tirades against language, symbols and time to rants against Star Trek, PBS and defense of the Unabomber.

The idea that language and time are at the foundation of the problems of civilization is difficult to wrap our minds around. It is almost impossible for us to imagine a world that is not based on the symbolic representation of ideas in language and the division of our life experience into units of seconds, hours, weeks and years.

On language, I think Zerzan’s basic idea is that the symbolic representation of our experience and reality through language eventually leads to a disconnection with reality and experience. This disconnect then leads to the loss of any notion of objective reality that we can grasp. People often talk about how disconnected philosophy and abstract academic thought is from the real world. Zerzan seems to have his finger on a very basic reason that this is true.

He is also very critical of postmodernism, because of its tendency to deny any objective experience of reality. It was interesting and refreshing to hear a criticism of PM thought that wasn’t from fundamentalist Christians. While PM thought calls into question a lot of modernity’s assumption it does not provide a way to move beyond modernity. Zerzan argues that PM actually perpetuates many of the problems of modernity, primarily our belief in progress and technological solutions to all our problems.

Time is not an innate experience (just as language is not a natural or biological phenomenon) according to Zerzan. Einstein answered the question “What is time?” by saying, “What a clock measures.” Physicists assume time as part of the natural world, but are not able to prove its existence. Studies have shown that hunter-gatherers do not experience time. They certainly experience days and seasons, but not the precisely divided thing that we call time. They do not have any concept of past and future. Zerzan also ties the concept of time to the division of labor and the rise of capitalism. As there was a need for people to specialize and be compensated for their work, time was necessary.

Many of the other essays are short reflections on many of the facets of our civilization that are unhealthy and destructive to human life with humanity and the earth. At the heart of the critique is the idea that agriculture is the basis of civilization and fundamentally detrimental to the earth. One essay points out that even pre-industrial agriculture caused a lot of erosion and destruction of plant and animal life.

One essay attempts to describe what a transition from civilization to another way of life would look like. While it was helpful in some ways to hear that a transition to another way of life might be possible, I still wondered what to do until that transition gets here. We’re left living this life in the midst of a destructive social order. Zerzan lives in a community near Eugene, OR. It would be helpful to hear how he lives in the midst of this world in order to maintain some integrity with these radical ideas.

I do not refer to myself as an anarchist or primitivist, even though I have been reading a lot in these areas lately. I do think these ideas have some merit and are worth considering as we face ecological and economic crises that border on the apocalyptic.

3 comments on “Running on Emptiness: The Pathology of Civilization”