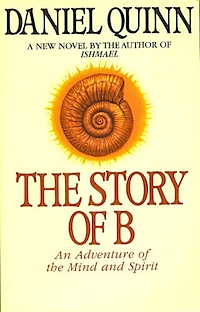 I just finished The Story of B the sequel to Ishmael, which inspired The Original Sin of Agriculture series. The second book has more of a plot, but less in the way of new ideas. What it does is spin out the ideas in Ishmael. The further exploration is certainly worth the read. I’m still processing it.

Initially, I didn’t want to start another series on the ideas and implications of this book. However, it has stuck in my mental craw. It is haunting me wherever I go and posing questions to other ideas I hear (See Religion, Violence and Agriculture?). So, it appears that an old school Holy Ghost revival of the Original Sin of Agriculture series is imminent.

I don’t want to spoil the surprise, but here’s a sneak preview of what I’d like to think more about:

While Ishmael pointed out a lot of our modern assumptions, The Story of B sometimes sought to go behind those assumptions and ask what people were like before agriculture, their religion and their relationship to the earth and each other. If everything before the rise of agriculture is “prehistory,” then it is a vast unknown territory where people that we can barely understand live. Trying to understand them may help us overcome ourselves.

Finally, I’m fascinated with the sequel’s take on religion, because I both agree and disagree with it. I think the author vastly oversimplifies things and ends up dismissing the world religions entirely. At the same time I agree wholeheartedly with the critique of my own religion, Christianity. I just think that Christianity holds the possibility of embracing the truth that Quinn reveals in his book.

So… here we go again…